Funding source: The National Centre for Research and Development (NCBR) 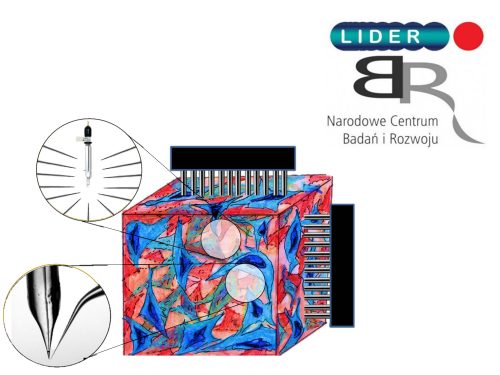 3D cell cultures play a critical role in real time studies of mammalian physiology at a cellular level and are postulated to become a bridge between 2D in vitro models and experiments on animals. Models of this kind are able to mimic the in vivo environment, including the hystologic, physiologic and functional properties of the tissues in question, much better than traditionally used planar cultures. This mimicry is attributed mainly to more natural cell-cell and cell-extracellular matrix interactions, which influence gene expression, proliferation, migration and adhesion. However, at present difficulties in analysis of such complex 3D structures and complete lack of possibilities of their automation restrain full emergence of this technology.

The main goal of this project is to develop a versatile platform which enables cell growth and electrochemical analysis in various point of the three dimensional culture. Optical techniques traditionally used to analyze planar cultures, encounter obvious difficulties when applied to imaging of inside of 3D structures. Our system with electrodes integrated at various points of the cell culture scaffold, will allow for viability studies, through measurements of oxygen and glucose consumption as well as analysis of neurotransmitters. Integration of other measurement types is possible in the future. Proposed prototype will be easy to use (at a level of commercial electrophysiology equipment), allow culturing of various cell types, with the use of different hydrogel scaffolds.

Final device will address two main groups i.e. scientists applying cell cultures to develop basic research and pharmaceutical companies. As no similar device exists the outcome of this project could potentially revolutionize the market of 3D cell culture. Given that their applications include cancer and stem cell research, tissue engineering, drug discovery and toxicology testing, an analytical-culturing platform of proposed kind is of utmost importance.