After what feels like a very long journey, our article on ion transfer in paper using an electrochemical pen has finally been published1The seed to this started several years ago as a sketch during a meeting. The idea was to do standard ion transfer, but with the aqueous and organic phases stabilised in separate pieces of paper. That was problematic… The organic phase wouldn’t stay in the paper – it evaporated or was pushed away by the aqueous phase. Eventually, the project evolved; first in a three-phase junction study that was published two years ago, and then, after contacting Damien Arrigan in Perth, into gelling the organic phase.

Marta went to Perth last year to learn how to work with gelled organic phases and there, working with a post-doc, Terence, they developed the idea of having the organic phase in a Pasteur pipette that could be pressed against the paper with the water-phase.

This has several potentially cool applications. As ion-transfer can be used as an analytical tool, we could imagine a sample being wiped up or dropped on a piece of filter paper and then be analysed immediately. It turns out that cellulose contains enough mobile ions to be able to make decent measurements without added electrolyte. The sample can also be concentrated in the gel through a “dip-and-pick” procedure, where the pen is moved to several positions on the sample surface, and analyte ions are transferred into the gel at each point. The detection is then done by reversing the potential and pushing all of the ions out again, in a variant of stripping voltammetry.

We also showed that the EC pen can be used with a paper-based flow system to detect chromatographically separated proteins.

We hope that with the help of the community we can come up with interesting uses for this new tool. 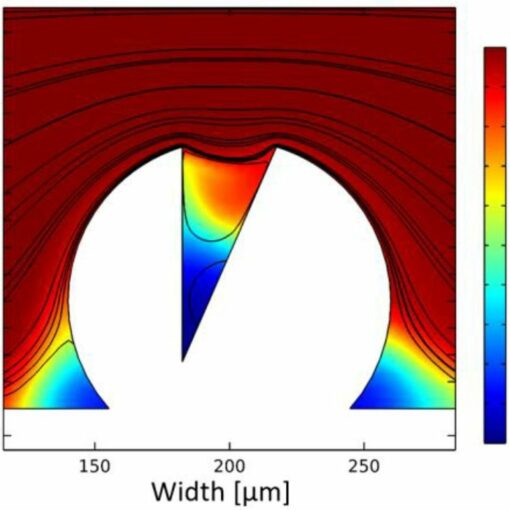 One thought on “Ion transfer voltammetry with an electrochemical pen”