During the summer, a new paper1 appeared in ChemElectroChem in the memorial issue to Jeam-Michel Saveant. which looks at the influence the solvent has on generation of H2O2 at a liquid|liquid interface. This is the latest paper in a long series of articles in the collaboration between Opałło and Hubert Girault in Lausanne. Our former group member Wojtek was an active part in that collaboration and is a co-author of the present publication.

In this article, the main goal was to investigate what happens to H2O2 generation at the interface between a room-temperature ionic liquid (RTIL) and water with different ILs. The RTILs were characterised by their viscosity and the difference in potential between the DMFc redox potential and the two-electron oxygen reduction potential. A weak correlation was found between this difference and the H2O2 flux, measured using SECM, indicating kinetic control of the reaction rather than mass transport limitation.

Another paper in the series of investigations of H2O2-generation at liquid|liquid interfaces was just accepted in Chemical Communications. In this case it’s […] 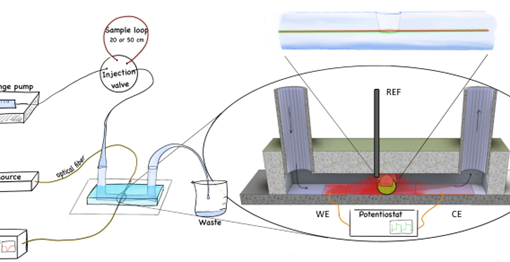 After months of work on the article, Martin and Andrzej finally got their second paper about electrochemical and optical studies using an […]